All of us here at the RSPCA would like to wish our Patron, Her Majesty The Queen, a very happy Platinum Jubilee.

"We're incredibly proud of our history and Royal status," says our Chief Executive Chris Sherwood. "It's been an honour to have had Her Majesty The Queen, a known animal lover, as our patron for the last 70 years. The Platinum Jubilee is an amazing achievement and we'll be celebrating along with the rest of the nation.

We'd like to wish HM The Queen a huge congratulations on this milestone and thank her for the support and dedication she has shown to the many charities she has supported over the decades.

To mark the occasion, here are seven things we'll be celebrating.

Queen Victoria played an active role within our charity, including designing a Queen's Medal and attending RSPCA events. Documents show that she wrote letters to us asking for the 'protection and safety' of cats who were generally misunderstood and mistreated. One letter details a one hundred guinea donation to the Society, stating: 'The Queen hears and reads with horror of the sufferings which the brute creation often undergo from the thoughtlessness of the ignorant'.

Her Majesty Queen Elizabeth II agreed to become our patron upon her accession to the throne in 1952. At the time, she featured in our Animal World magazine (now called Animal Life).

2. Animal welfare in the Queen's Speech

During her reign, the Queen's Speech to Parliament has delivered some huge steps forward for animal welfare. Not least the Animal Welfare Act of 2006, which for the first time meant the RSPCA could take action to prevent an animal suffering - rather than taking action only after they'd been harmed.

The Act also introduced animals' five welfare needs (the right diet, environment, company, the right to good health and to be allowed to display their natural behaviour).

Most recently, her 2021 Queen's Speech introduced the Animal Welfare (Sentience) Bill, which has been passed, along with a ban on glue traps and and the introduction of subsidies for farmers who meet higher welfare standards. The 2021 Speech also launched the Kept Animals Bill which, while not completed, has been carried over to this year's Parliament. Add your voice to this and other vital animal welfare campaigns. 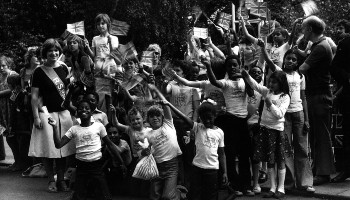 The RSPCA celebrated the Silver Jubilee on The Mall in 1977. And when Queen Elizabeth marked her 90th birthday in 2016, we were honoured to take part in the celebrations. These saw The Mall in London's St James's Park transformed for the largest ever street party, with 10,000 guests. The RSPCA was one of 600 charities and organisations invited there to celebrate.

The Queen famously adores corgis and has reportedly owned more than 30 since her first, Susan, was given to her as an 18th birthday present. Two of them - Willow and Holly - were her co-stars when she appeared in the James Bond sketch as part of the London 2012 Olympic opening ceremony. Willow also appeared in the official portrait commemorating Her Majesty's 90th birthday.

Today the Queen is believed to have four dogs: a corgi-dachshund cross named Candy, a corgi named Muick, as well as Whisper, a corgi she adopted after his owner - a Sandringham gatekeeper - passed away. Her most recent addition was Lissy, a cocker spaniel.

She's frequently shown affection to dogs in public, stopping on many an official parade to admire and pet dogs in the crowd.

5. The guardian of our sea mammals

It sounds like something from a fairytale, but remarkably it's true that the Queen owns all whales, dolphins and porpoises in the waters within three miles of our shores - thanks to a statute issued by King Edward II in 1324.

She also has the right to claim ownership of all unmarked mute swans in England and Wales - but it's of course a myth that the Royals still eat them! Swans are a protected species and as RSPCA patron, they are safe in UK waters.

In fact, the traditional 'Swan Upping' that takes place on a stretch of the Thames each year now serves as an act of education and conservation. A flotilla of rowing skiffs, manned by a team of Swan Uppers and the Queen's Swan Marker, journeys up the river for five days, checking the health of any swan families they find.

London's 10 Royal Parks are all owned by the Crown, run as a charity, and open for the public to enjoy. The 5,000 acres are also home to a vast range of wildlife and the Help Nature Thrive project puts biodiversity and conservation at the heart of the Royal Parks' work. To mark the Jubilee, children across the UK are also able to work towards a Junior Forester Award. And the Queen's Green Canopy is a UK-wide initiative for 2022 which encourages people's to 'plant a tree for the Jubilee'. Throughout her reign, Queen Elizabeth has planted more than 1,500 trees and spoken alongside Sir David Attenborough about their importance for the future of the planet.