A blog by Chloe Stevens, one of our scientific officers and animals in science experts.

Many of us have been finding social distancing tough over the last year but did you know that fulfilling social lives are important to rats too? Here at the RSPCA, we always try to encourage people to see rats as the intelligent and sentient animals they are! Today on the blog, we're talking about rats' amazing social lives, so read on to find out more.

Rats can be extremely social and even like to cuddle!

Rats would hate social distancing. They are really social animals, forming large groups in the wild, and living together in large shared burrows. Colonies can be made up of around 150 individuals, of all different ages, so there are lots of opportunities for a rat to have a varied social life!

Life in a rat colony is full of friendly social interactions. Rats might show affection by greeting one another with a friendly sniff or nose-touch, or by grooming one another - and it's thought that they'll even help each other target those hard-to-reach spots! They'll also huddle together, even when it's warm (so we know they're not just doing it to keep cosy). And younger rats have even been known to play-fight!

Rats can recognise and communicate with their friends

We also know that rats can recognise each other by their smell, can tell which rats they're more closely related to and can even read each other's facial expressions - all of which help social interactions in the group.

Rats will look out for friends who are hungry or trapped!

Domesticated rats are no different to their wild cousins when it comes to being social! For example, rats will share food with one another and will give even more food to a rat who is hungry. We also know that if a rat is given the choice between receiving their own reward, and cooperating with a friend so that both receive the sweet treat, they'll choose the option which results in both rats getting a reward. They'll even work to release another rat from a trap - even when there's no reward at all!

Pet owner tip: If you have pet rats, it's very important to house them in groups (all males or all females), and to keep the group stable - avoid adding new rats if you can.

Rats can build strong bonds with humans (and even high-five!)

As well as interacting with their cage mates, pet rats can build strong bonds with their owners too. If you and your rats are new to one another, regular, gentle contact is a great way to get them used to you and to build a bond (rewarding them with a treat after handling is often helpful too!).

Once your rats are used to you, they'll usually be happy to spend time with you by relaxing in your lap - or a fun activity for both rats and humans is to train your rats to do tricks, like rolling over or giving a high-five!

Two first-time rat owners, Rachel and Charli, tell us why they fell in love with rats and unexpectedly found them to be their perfect pet. They also let us in on their pets' very clever and surprising skill-sets!

"Did I mention they can also be toilet trained and are incredibly clean?!"

One rat owner found that her rats were a wonderful addition to her household! Rachel White, who volunteers at the RSPCA Macclesfield, SE Cheshire and Buxton branch, tells us more:

"I had never had any dealings with rats before - not of the domestic kind, anyway! That was until the branch I foster for had a call to say over 60 domestic rats had been found dumped in Yorkshire. Luckily they were found and our team, along with some other branches, pulled together to take them in and ensure that they were safe and had a chance at a happy ending. 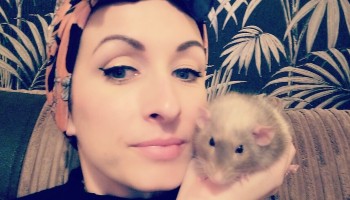 I agreed to take in ten, and in a short time, I learned a lot about them, and realised how misunderstood they really are! Their personalities are so unique - they are bursting with character, quick to learn, LOVE affection and even more so... Food!

Once all the foster rats were adopted, I ended up missing ratty company and adopted two of my own (from the RSPCA of course). 'Lieutenant Dan' and 'Forrest Gump' brought me so much happiness! They would wait at the front of the cage every morning for their breakfast, would greet me when I got home from work, sit on the sofa and my shoulder to watch tv with me, play hide and seek with food and the best part: give lots of affection!

Did I mention they can also be toilet trained and are incredibly clean?! I think the only downside to rats is that they don't live long enough, but for the time they do, every second is completely worth it."

"I always liken it to having a pocket-sized dog!"

"I never really meant to have pet rats, but when two young rat pups, Rufus and Remy, needed a home - I couldn't say no! They quickly stole my heart - one was incredibly clever (he quickly learnt how to open the door to their enclosure!) and the other was the cuddliest boy - only really happy when he was asleep across my lap. 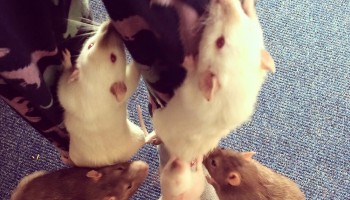 All of my boys have been rescue rats, some very young, some very old, some friendly, some shy. I could write pages on why rats are so amazing, but I think the two main things are their sheer intelligence and their affection. I always liken it to having a pocket-sized dog!

I have trained my boys to complete a mini agility course and I even had one that would play fetch. I've also had several of my rats work out how to open the various rat runs I have had over the years and some have even learnt to open human doors!

They have all honestly bought me so much joy over the years, and my boys have shown so many people that rats do not deserve such a bad rep. They are one of the greatest pets you could ask for and they really give as much back to you as you put into them."

Find out more about the interesting world of rats

Interested in learning more about providing the right company for your rats? We've got plenty of tips for you. Or, why not take a look at our rat fact file, containing some of our favourite rat facts?!