'Minnie' shocked the nation when she was found in June this year. 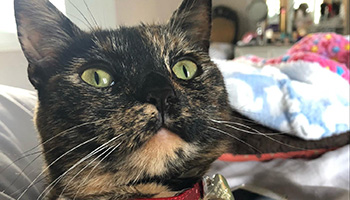 A cat found with wounds all over her body and signs of sexual abuse has found happiness in a new home, four months after being taken into our care.

One-year-old tortoiseshell Minnie had a heartbreaking start in life after being found in Bagshot Road, Woking with burns all over her body and signs of sexual abuse.

She had a makeshift splint on her front leg, her wounds were infected with maggots and she was left unable to stand.

However, Minnie has now found her happily ever after as on Tuesday (October 8) she was picked up from her foster carer by new owners Thea and Simon Mumford who live in Kent.

My friend shared Minnie's story on social media in June and I was just so upset reading it - how could anyone do such a thing to a defenceless animal?

As soon as I saw she was looking for a home I got in touch with Millbrook Animal Centre and we were successful - I still can't believe she is here.

When we first met her I thought it would take her a little while to warm to us but straight away she was so playful and loving, her transformation has been astonishing.

She still has moments of being scared so I often let her come to me and she will nuzzle her head under my hand, looking for some affection.

I feel in such a privileged position to have been able to help Minnie. You see stories like this and feel sad but it's not often you're able to make a real difference.

I just want everyone who was affected by her story to know that this little cat will only know love for the rest of her life.

Claire Jones, cattery supervisor at Millbrook Animal Centre, who looked after Minnie in the early days of her recovery, said:

We all fell completely head over heels for little Minnie when she came into the centre. She's such a lovely little cat and had such shocking injuries.

She's a tough cookie, and she gradually showed small signs of improvement in the cattery, and in her foster home, her legs got stronger and stronger.

It's wonderful to know she is now in a loving forever home where she can enjoy the rest of her life surrounded by a family who cares for her.

This month we launched our 'Adoptober' campaign and are dedicating the month of October to raising awareness of our vital work finding homes for animals most in need. This week (14-20 October) is dedicated to cats and celebrating those just like Minnie.

As well as finding homes for unwanted animals, we also rescued more cats than any other animal last year.

If you're not in a position to give a pet a home this October, you can still help thousands of animals in our care by donating.