Not such a Happy Christmas for Santa's helpers

Not such a Happy Christmas for Santa's helpers

The spike in calls over the festive season reveals concerns for the welfare of reindeer used in festive events.

The thought of meeting a real-life reindeer at a Christmas event is exciting for people of all ages, but we're concerned that these complex creatures could be suffering as a result. 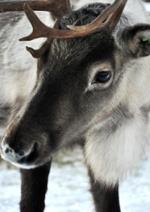 The festive period sees a spike in calls about reindeer to our 24-hour cruelty line and last Christmas (2018) we received 43 calls  concerning more than 100 reported reindeer. This compares to a monthly average of 3 calls about 10 reindeer during other months.

As Christmas approaches, we and other animal welfare charities are really concerned that reindeer used in festive events across the country could be suffering in silence. Reindeer are kept here in the UK year-round but we always see a spike in concerned calls about them in the build-up to Christmas, which is when they're taken out to be on displays at festive events.

We understand that it must seem magical for people to see a reindeer at Christmas, but the reality is reindeer aren't easy to keep well and need specialised care. They get stressed very easily and are very susceptible to many health and welfare problems.

In the wild, they're prey animals so they naturally hide their illnesses, and we're concerned many owners may not realise their reindeer, which are attending stressful, busy festive events, are poorly or be able to spot the problems until it's too late.

Reindeers transported to the UK are at risk

Reindeer at Christmas events may be transported long distances and spend time in small pens where they have nowhere to retreat to and hide if they feel stressed. They are often petted and fed by many members of the public or may take part in busy parades.

They're exposed to busy environments, surrounded by crowds, noise and lights, which can cause the semi-wild animals a great deal of stress.

Welfare organisations fear that many people taking on reindeer (that are highly adapted to living in arctic conditions) don't realise they're more complicated to care for than their cloven-hoofed cousins such as cattle, goats and sheep and, as a result, reindeer are suffering.

These animals are semi-wild and not the same as deer that are native to the UK and it's much more difficult to meet their needs in this country.

Those that aren't bred here are imported from Scandinavia, but even just being shipped over to the UK is likely to be stressful for these animals - and that stress then leaves them vulnerable to disease and a whole host of other welfare issues.

Unfortunately, the reindeer that do make it over here can have a poor existence - they're not suited to being kept in very small groups in confined spaces and they're vulnerable to a host of health and welfare problems in this country. There's also a concern that those keeping small numbers of reindeer on small holdings to make money from them at seasonal events are unlikely to have the specialist knowledge needed to care for these animals properly.

How to have an animal-kind Christmas

In 2018, government figures show that 47 reindeer were imported into the UK.

Around 50 reindeer are imported each year, although far more were brought in before imports were restricted. Many are likely destined for use in seasonal events. We do not know what happens to them after Christmas is over. Unfortunately, there are no formal requirements for registering reindeer and so we don¿t know how many are being kept and where.

We love Christmas and we understand why families may think that paying to visit an attraction with live reindeer would be a magical, festive thing to do, but we want this to be a happy and healthy time for humans and animals alike. We ask that people consider the welfare implications of the animals involved and perhaps look for events which don't include live animals. Families could even do something to help native wildlife and have some festive fun, by making wildlife-friendly 'reindeer food' to leave in the garden for Rudolph, and wild birds.

Find out how you can help us deliver Kindness at Christmas this year.