We're celebrating the news that supermarket chain Waitrose is the latest company to commit to a significant improvement in meat chicken welfare.

More meat chickens are reared each year in the UK than any other land animal (over one billion) and a vast majority are kept in conditions which we believe are unacceptable and puts them at risk of suffering. 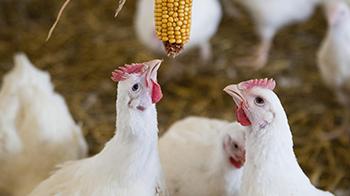 Waitrose joins Marks & Spencer, Nestlé and Knorr who have also signed up to the Better Chicken Commitment, pledging to meet a number of key requirements to improve the welfare of meat chickens across their entire supply. This means that even the cheapest chicken products will have been raised to higher standards.

The initiative has sparked recent media coverage following the launch of our chicken campaign which revealed shoppers expect supermarkets to ensure higher animal welfare, with some retailers using potentially misleading labelling that can give the false impression of higher welfare conditions.

The requirements for the commitment have been drawn up by a partnership of animal protection groups, ourselves included. Now we're urging other supermarkets to follow suit:

We want them to commit to raising welfare standards across their supply chain of chicken by 2026.

Achieving higher welfare means addressing the most pressing welfare concerns in meat chicken production through the use of:

We've long campaigned on these issues.

The chicken market is growing rapidly whilst welfare is left behind

More meat chickens are produced than any other terrestrial farm animal in the UK.

Despite rapidly growing demand, there's been little progress made in improving the welfare of the majority of chickens bred for their meat. Fast growing breeds still dominate the market; and rapid growth can contribute to painful conditions such as severe lameness and heart defects.

Though some supermarkets may offer a high welfare option, this commitment is calling on them to raise the welfare of chickens across their supply. Of course, we would like to see all supermarkets adopt our standards, but the Better Chicken Commitment is a great step in the right direction for animal welfare.

It's been more than 10 years since chicken welfare was highlighted by celebrity chefs Jamie Oliver and Hugh Fearnley-Whittingstall and sadly there hasn't been as much progress as we hoped there would have been.

Retailers can often 'justify' the selling of chicken reared to lower-welfare standards by citing they're providing both 'consumer choice' and a range of price points. However, in reality, this gives little choice to consumers on a budget other than to purchase intensively reared chicken. Our polling shows that most shoppers expect all chicken on sale to be higher welfare.

Our poll shows that more than 8 out of 10 people (86 percent) who buy chicken meat expect the supermarkets to ensure that all chicken meat they sell is farmed to higher welfare standards.

Shoppers who care about chicken welfare can look for our RSPCA Assured labelled products which are on sale in Aldi, Asda, Co-op, Morrison's, Booths and Sainsbury's.

In order to have the RSPCA Assured label, farmers have to meet our strict welfare standards.

We're currently focusing on Tesco who have a 22.9 percent market share in fresh indoor intensive chicken meat sales. Join the thousands of people who have already taken part in our campaign since launch!