This World Spay Day (February 26) a group of cat and vet organisations have come together to highlight the cat overpopulation crisis facing the UK today.

To mark the international day which raises awareness of the need to neuter our pets, we've revealed that cats are the most rescued animal by our frontline officers.

There aren't enough homes for the number of homeless cats

The Cat Population Control Group (CPCG) is calling for kittens to be neutered from four months old to avoid unplanned litters and reduce the thousands of cats who end up in our care or the care of other charities.

Sadly, cats are the most rescued animal by our team and we receive hundreds of thousands of calls about their welfare each year. The UK is facing a cat overpopulation crisis as there are simply not enough homes for the large number of cats we and other charities see. We believe the answer is to neuter cats from four months old to ensure that no more unwanted litters are born. 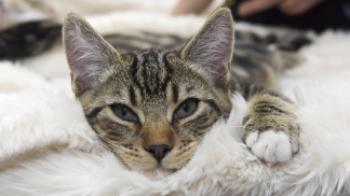 Our figures reveal that Greater London takes the top spot for the most cats rescued with 2,350 cats coming into our care from the capital alone last year.

A neutering scheme called C4 in Greater London is celebrating its 20th anniversary this month and in that time the project has neutered more than 150,000 cats - that's as many cats as the whole population of Oxford. London was followed by the West Midlands where 1,887 cats were rescued by our frontline officers.

In Greater Manchester, we rescued over 1,500 cats. This year, our staff at the Greater Manchester Animal Hospital are promoting World Spay Day by launching their mobile neutering van which will travel around Greater Manchester offering free or discounted neutering for cat owners. This scheme has been funded with help from Support Adoption for Pets, the charitable arm of Pets at Home, as well as the Charitable Trust W.G Harvey's Discretionary Settlement.

The PDSA Animal Wellbeing (PAW) Report 2018, revealed that 9 percent of cats are not neutered which equates to 999,000 unneutered cats in the UK.

The top reasons for not neutering included:

Neutering cats from four months old rather than the traditional six months will have a significant impact on the number of unplanned litters. Therefore, reducing the large number of homeless cats.

We're working with other charities to fight the issue

The CPCG collaboration enables the charities to work together effectively to decrease the numbers of accidental litters born, which is fundamental to preventing cats and kittens ending up in shelter care or being born on the streets.

Cats Protection has also piloted its stray cat project (Cat Watch) in six regions in the UK with the aim of estimating the number of strays in the UK and working with urban communities to improve cat welfare. The first trial launched in Bulwell in Nottingham in 2016 and due to this work, in 2018 there were no homeless kittens born on Bulwell's streets.

Find out more about the charities and vet practices taking part in World Spay Day events this year.