Nearly a quarter of schoolchildren aged 10-18 have witnessed animal cruelty and neglect on social media. 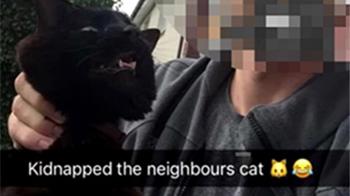 Young children are being exposed to horrific incidents of animal suffering online in ways previous generations have simply not experienced. We see nearly 5,000 incidents of cruelty and neglect on social media reported to it each year.

In response, we're launching Generation Kind - our biggest ever education and prevention programme aimed at children. We've also launched a petition calling for animal welfare to be taught in all schools.

A new poll by the charity revealed 78 percent of people say that animal welfare should be on the curriculum.

The number of children seeing animal abuse online is shocking - the current generation of children are witnessing horrifying animal cruelty and neglect through channels which simply didn't exist for previous generations.

The risk for children growing up in the twenty-first century is that frequent and casual exposure to animal abuse will desensitise them and may even make it seem acceptable. Animals need us now more than ever and we want to grow a new generation of young people who care, who are informed and who want to do their best for animals.

This is why we're launching Generation Kind - an ambitious education programme targeting school children, children in care, young offenders or those at risk of offending and other disadvantaged young people. Central to this is a new campaign to get animal welfare taught in all schools.

Polling carried out by Beautiful Insights revealed 23 percent of 10-18-year-olds had seen animal cruelty on social media sites and a further 3 percent had witnessed it first-hand.

Teaching animal welfare would ensure children develop key life skills, including compassion and empathy, as well as respect for animals and a basic understanding of how to care for them.

We also believe animal welfare could make a significant contribution to young people's spiritual, moral, social and cultural development, which all schools must promote.

This pairs up disadvantaged young people and traumatised dogs for a training course which educates young people about animal welfare encourages empathy for animals and humans and teaches key skills. In return, it helps dogs recover from trauma through their care, attention and training.

Aimed at school children in deprived areas, young people who have been excluded from school, those out of employment or training, or from troubled families, Wild Things gives them an opportunity to engage with and understand animals and develop compassion and empathy for them.

This aims to capitalise on the enthusiasm for animals shown by many disadvantaged children who take part in our projects by offering them a chance to pursue this passion through an apprenticeship with us.

This is an education project aimed at 7-11 year olds, featuring online videos and interactive content, to inspire compassion for animals through learning about their needs.

Our animal action days are aimed at children in care, to help them develop positive relationships with animals. The project teaches compassion and empathy.

We run sessions for trainee teachers to help them shape young minds, so young people leave school knowing about the importance of kindness to animals and revolutionise attitudes and behaviour to protect the lives of countless animals in the future.

We train members of Youth Offending Teams to help them rehabilitate young people who have harmed animals. The projects teach about the consequences of cruelty and promote greater empathy for animals.

Our volunteer and inspectorate speakers go into schools, youth groups and clubs to teach children about the five welfare needs of animals and promote a better understanding of animals. We want to expand this to 150 speakers across the country.

Through the expansion of these projects, we hope to reach two million children by 2030.

This is the most important campaign we've ever undertaken. We're fighting animal abuse and neglect every day but we can only do so much. If we can foster empathy and responsibility towards animals in the consumers, politicians and decision makers of tomorrow, we can create a society which is truly kinder to animals.

How you can get involved

Find out more about Generation Kind today, and if you wish you can support the campaign by signing our petition to get animal welfare taught in schools.