Share this...
'Miracle' dog whose head was 'caved in' makes incredible recovery in new home

Bruce was found dumped having been beaten, set on fire and left for dead.

The miraculous recovery of a dog whose head was 'caved in' by his attackers features in the new series of The Dog Rescuers.

Poor Bruce was found beaten, dumped and left for dead 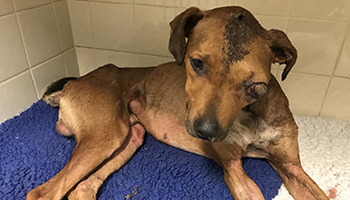 The horrific attack on bull lurcher, Bruce made headlines around the country when he was found beaten, dumped and left for dead.

Bruce was found wandering in a sleepy village on the outskirts of Carlisle on 30 August 2018. He was rushed to the vets where he needed life-saving surgery.

I was absolutely gobsmacked at what I saw. I've worked for the RSPCA for 10 years and I don't think I've ever seen anything that awful.

We know Bruce had been in that condition for a number of days before he got the vet treatment he needed. The pain that he must have been in is unimaginable. He was losing the will to carry on.

Bruce's story features in the new series of The Dog Rescuers on Channel 5. In the first episode, presenter Alan Davies said that it's a 'miracle' that Bruce survived and recovered from his ordeal.

The crossbreed had a deep hole in the top of his skull and puncture wounds in the side of his face - thought to have been caused by being beaten with a bit of wood with a nail sticking out - and burns around his tail. Sam added:

You really question what kind of person could do this. Vets said the side of his face had been caved in and described the damage to his skull as dramatic.

Bruce needed emergency surgery - which took 3.5 hours - to repair his fractured skull and treat the infection in his head caused by suspected splinters from the wood used to beat him. His skull had been 'shattered' and he couldn't open his jaw.  Sam added:

Bruce is a fighter. As soon as he woke up from the surgery his tail was wagging!

New owner Marie Coleman, who was working at the vet surgery when Bruce was admitted, said it was love at first sight. She fostered him once he was strong enough and has now adopted him. She said

He has settled in very well. He loves home life. He is so special. Bruce is 100% happy in life and he's made our lives 100% better.

Our priority will always be helping animals in need. To do that, we rely on the kindness of people just like you to help our hard-working team continue the life-saving work that they do 24-hours a day.

From our animal rescue operations to offering advice just like this, helping to make sure animal owners are equipped to give their beloved pets the best life they can - we couldn't do it without you.

It costs around £670,000 to run just one of our animal centres each year and it's here that we work around the clock to care for our rescue animals and prepare them for their new home.

As a charity, we rely on your generous donations (no matter how small) to help run our centres and support our mission to create a world that's kinder to all animals. What we're saying is - every day, our animals rely on the kindness of humans to make a difference.

Will you make a donation to animals in need?